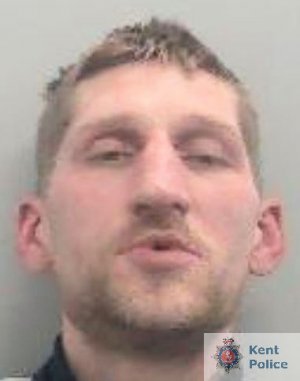 Kestutis Levickas
A county lines drug dealer arrested as part of a Kent Police clampdown in Dover has been jailed for three years.

Kestutis Levickas was one of almost 40 people detained for class A drug offences in the space of just three days in early February 2020.

The 33-year-old, of Shooters Hill, Dover, sold crack cocaine and heroin in the town on behalf of a gang based outside of Kent who advertised their products via a mobile phone number known as the Rex line.

Following an investigation by Kent Police's Serious Crime Directorate, Levickas was charged with supplying class A drugs on Wednesday 19 February and released on bail by Medway magistrates the following day.

He failed to attend his next scheduled court appearance but was further arrested on Monday 23 March. He was transported to Canterbury Crown Court the same day and pleaded guilty to both offences before being sentenced to three years’ imprisonment.

Detective Constable Glenn Blanchard, Kent Police's investigating officer, said: "Kent Police's operation has caused significant disruption to those who seek to supply drugs in Dover and sends a clear message that we will not tolerate county lines drug activity in Kent.

"I am pleased to see another individual given a sentence that means he won't be returning to the town any time soon."