The Unlikely Death of Patience Ransley

The following article was written by John Vaughan.

The 26th of September 1944 was a day that was to be remembered by the residents of Dover, for it was on this day that their long ordeal at the hands of the German naval gunners in the batteries along the coast of France was to finally come to an end. Huge air raids had saturated the Nazi guns in the previous weeks, the British guns (the 14" 'Winnie' and 'Pooh' manned by the Royal Marines at St. Margaret's, and the 15" 'Jane' and 'Clem' manned by the Royal Artillery at Wanstone Farm) had kept up a steady counter-battery barrage in an attempt to suppress the German fire, and now Canadian troops were advancing to attack and silence the heavily fortified positions.

But the enemy were not yet defeated.

During the course of that terrible last day over 50 shells landed in the Dover area as the desperate gunners on the opposing shore, facing an uncertain future at the hands of the Canadian soldiers, followed orders and attempted to use up their remaining stocks of ammunition against innocent civilians. Several deaths resulted in the town from this indiscriminate firing - houses collapsed into the streets pinning their unfortunate occupants in the rubble, a soldier died in a bungalow at Broadlees Road, a sailor died in Snargate Street when a pub was hit, an airman died in Frith Road, civilians died in their homes or out in the open. But surely the most unlikely and therefore most tragic death was that of 63 year old Patience Ransley… unlikely because she was sheltering deep underground, protected inside a tunnel lined with reinforced concrete and beneath 38 feet of chalk. This was the 900 foot long 'Barwick's Cave' shelter that ran from Snargate Street to Durham Hill.

There were many such deep shelters in Dover during the war and on this day they were all busy as the local populace sought cover from the ruthless bombardment above. They had every reason to feel safe and 'normal' life continued underground with conversations, playing cards, reading, knitting or just contemplative silence while the sound of distant explosions marked the arrival of yet another shell and the end of yet another property. But it was now that the bizarre, million-to-one incident occurred.

A one ton, 16" shell fired from Lindemann Battery, situated below the Noires Mottes escarpment near Sangatte, completed it's curve high above the town and whistled down from the sky at a speed of 1500 feet per second and an angle of 35 degrees. It penetrated a grave in the old cemetery above the shelter and bored its way down through a further 24 feet of solid chalk before exploding a mere 7 feet above the thick reinforced concrete roof of the tunnel. The blast chamber formed by the explosion ruptured the roof over a length of 12 feet and poor Patience, sitting quietly in this spot, was killed instantly.

A few hours later the gun batteries had all been silenced as nearly 30,000 Germans surrendered in the Pas de Calais area to the advancing Allies, and at last Dover was free from the almost daily shelling that had devastated the town over the past years.

In 1954 a section of painted armour plating from one of the turrets of Lindemann Battery was erected on the sea front at Dover - visitors and residents alike pass by daily with scarcely a glance or a thought about how Dover suffered during those dark days. 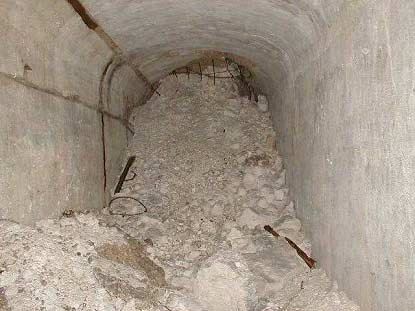 The scene inside the tunnel today, where the structure collapsed
end link