Dover from "Ports of England"

Drawn by J.M.W. Turner and engraved by Thomas Goff Lupton, from the book "Ports of England" (1827).

The following extract is from the book "The Harbours of England" (1895) by John Ruskin, which featured the image with additional illustrative text.

This port has some right to take precedence of others, as being that assuredly which first exercises the hospitality of England to the majority of strangers who set foot on her shores. I place it first therefore among our present subjects ; though the drawing itself, and chiefly on account of its manifestation of Turner's faulty habit of local exaggeration, deserves no such pre-eminence. He always painted, not the place itself, but his impres sion of it, and this on steady principle ; leav ing to inferior artists the task of topographical detail ; and he was right in this principle, as I have shown elsewhere, when the impression was a genuine one ; but in the present case it is not so. He has lost the real character of Dover Cliffs by making the town at their feet three times lower in proportionate height than it really is ; nor is he to be justified in giving the barracks, which appear on the left hand, more the air of a hospice on the top of an Alpine precipice, than of an establishment which, out of Snargate street, can be reached, without drawing breath, by a winding stair of some 170 steps; making the slope beside them more like the side of Skiddaw than what it really is, the earthwork of an unimportant battery.

This design is also remarkable as an in stance of that restlessness which was above noticed even in Turner's least stormy seas. There is nothing tremendous here in scale of wave, but the whole surface is fretted and disquieted by torturing wind ; an effect which was always increased during the progress of the subjects, by Turner's habit of scratching out small sparkling lights, in order to make the plate li bright," or " lively." In a general way the engravers used to like this, and, as far as they were able, would tempt Turner farther into the practice, which was precisely equivalent to that of supplying the place of healthy and heart-whole cheerfulness by dram drinking.

The two seagulls in the front of the pic ture were additions of this kind, and are very injurious, confusing the organisation and concealing the power of the sea. The merits of the drawing are, however, still great as a piece of composition. The left-hand side is most interesting, and characteristic of Turner : no other artist would have put the round pier so exactly under the round cliff. It is under it so accurately, that if the nearly vertical falling line of that cliff be continued, it strikes the sea-base of the pier to a hair's breadth. But Turner knew better than any man the value of echo, as well as of contrast, — of repetition, as well as of opposition. The round pier repeats the line of the main cliff, and then the sail repeats the diagonal shadow which crosses it, and emerges above it just as the embankment does above the cliff brow. Lower, come the opposing curves in the two boats, the whole forming one group of sequent lines up the whole side of the picture. The rest of the composition is more common place than is usual with the great master ; but there are beautiful transitions of light and shade between the sails of the little fishing- boat, the brig behind her, and the cliffs. Note how dexterously the two front sails of the brig are brought on the top of the white sail of the fishing-boat to help to detach it from the white cliffs. 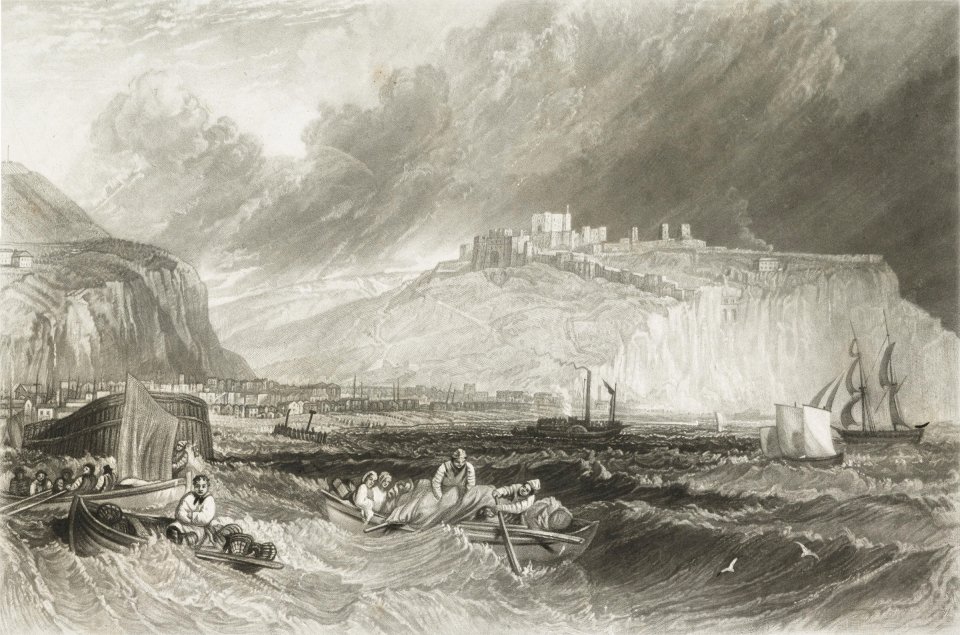