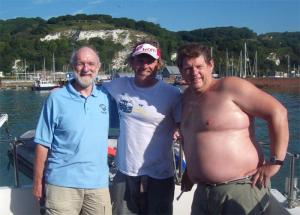 Friday proved to be a fantastic day in every regard, perfect conditions, good team, great Pilot, enormous support and good wishes - for which so many, many, thanks!

The bottom line was that we were absolutey delighted to complete the swim in 11hrs 21mins, equalling, we believe, the 7th fastest of the 15 3 person team Channel Swimming & Pilot Federation crossings in the last ten years, well below the average of 12 hours, times ranging from 10.09 to 13.28.. At the time of writing in early August, this is the 8th fastest of abt 63 crossings so far in 2010, well below the average of nearly 14 hours. We each had four swims of 1 hour each, except my last dip was the final 21 minutes (eyeballs out - see later!) - the only disappointment was that it was declared too dangerous to allow all three of us to land amongst the rocks just below the famous lighthouse on Cap Gris Nez and collect the traditional pebble!

We, The Flying Doctors (in name only!), finally received the go ahead late on Thursday evening, and met at 7.45am (late start!) on Friday in Dover Marina and loaded up on our boat Pace Arrrow, and met our brilliant Pilot, Paul Foreman, his crew borrowed from another SC&PF boat, Anastasia, and the official Observer, Jordan.

It was nice to meet Alison Lievesley briefly, who had a successful solo crossing with Paul and Pace Arrow last August, and was supporting a solo attempt aboard Neil Streeter's Suva.

After a bit of paperwork and a fifteen minute journey we arrived at Samphire Hoe, a beach on the west of Dover Harbour, nestling under some familiar white cliffs. Ahead of us, but in sight of the beach were two more swim attempts, a solo with the CSA boat Sam Allen, and anogther solo further out on SC&PF Viking Princess. The sea was remarkably calm and an inviting 17ºC.

First in was 49 yr old Dave Otteson from Hythe, a Hotel Manager in Canterbury until a week ago, now taking over a hotel on the seafront overlooking Dover Harbour (convenient or what!), with a 6 hour qualifying swim at 12.5º under his belt, should he ever fancy going solo. Dave jumped in, swam the 200m to the beach, got clear of the water, and ran back in to start the swim at 8.24am. With just one of the two 250hp motors idling on the opposite side to the swimmer, Pace Arrow picked up enough speed, towing a Wickes aggregate bag as drag anchor - sophisticated stuff.

Suva arrived at Samphire and started about ten minutes later, but passed us during that first hour. We were later to pass them an hour further on, and they continued to drift away to our stern and became a speck on the horizon before sadly giving up the attempt and returning to Dover. An experienced Channel man but reportedly not having the all important mindset for a solo that day - even in such ideal conditions! Worth remembering that for every completed solo crossing there are nine that don't succeed!

Next up was Gary Brickley, a 44yr old Lecturer in Physiology at the Brighton Uni at Eastbourne, coached by former British Internationl triathlete Glenn Cook. I had briefly met Gary when he was tutoring at a SCASA Masters Seminar in Eastbourne some years ago but, rather casually, Dave and I only met Gary properly on that Friday morning!

A powerful swimmer, Gary pushed us on in increasingly hot weather, with little shade on our comparatively small and modest fishing boat. The sea remained calm, there was no wind and precious little cloud. A number of jellyfish were noted but none gave any trouble. We had passed Suva on the starboard and were catching Sam Allen a way out to the port side.

As the oldest on the team at 64yrs, a Chartered Building Surveyor and Masters Coach for Dorking SC, my first entry, watched by our CS&PF Observer, was at 10.24am, swimming around the incoming swimmer and passing without touching and before he touched the boat. It was great to be in the water, settling into a rhythm, keeping an eye on Pace Arrow as she moved alongside, sometimes ahead sometimes behind. The White Cliffs still seemed close, they are so big, though probably 4 miles or more had passed. Just a solitary flat fish (Dover Sole maybe?) was seen to break the monotony, until a touch of calf cramp in my right leg after about 50 minutes. Not welcome, but I managed to stretch it out and get the leg back into operation without breaking the rhythm too much. It was motivating to see Dave stripping off on the boat and being sprayed with sunblock, and I knew my first hour must soon be up.

After 3 or 4 hours we were entering the westbound shipping lane, but fortunately, traffic was relatively light and it remained that way for most of the day. The eastbound current was carrying us inevitably towards the main cross channel ferry lanes, though Paul kept Pace Arrow pointing 150º towards Cap Gris Nez. At the end of the neap tide, the movement of water is still modest in comparison with the spring tide of the following week, when the inevitable 'S' shape of the swimmers' crossing becomes even more pronounced. The assortment of tankers, container ships, ferries seem very large viewed from water level, many simply enormous! They churn up extremely cold water from the deep and create significant wake. Pilot Paul keeps in radio contact with those he calculates will be in the wrong place at the wrong time, politely requesting they change course to go round us. The accommodating ones go astern, others don't.

After our swims, we dried, wet cossies off, got some clothing on, hot drink and food on board. No real problems with cold on such a day, and no sickness in or out of the water. The two hours on board went quickly compared with the hour swim. Dave's wife Sally was the only other on board apart from the crew, ready with the sunblock, official photographer, great support and avid magazine reader.

Paul had quickly assessed our respective strengths and used his vast experience to get us through the shipping lanes, across the westward current and into a position to take advantage of the tides to make an approach of the Cap from the north, hopefully avoiding the possibility of being swept past the Cap and adding huge amounts of time to the journey. Landing to the immediate east of the lighthouse is impossible due to the razor sharp 'Dragons' Teeth' rocks, beyond those to the east and also to the south west are beaches but represent extra time to reach. Late in the afternoon we heard on the radio that the solo swim attempt with the boat Sam Allen had also aborted, and were on the way back to Folkestone.

With the French coast seemingly so close, and the Cap lighthouse to our left, Gary was reaching the end of his 4th swim, with a slight chop in the water by then as the wind became more evident, and Paul confirmed I would be going back in. He asked "How fast can you swim half a mile?" I said about 15minutes when fresh. He told me to give it all I had, eyeballs out, as the tide was on the turn and the current was now moving fast to the east, towards the Dragon's Teeth, and if I couldn't beat it, we would be sucked back out on the ebb tide and carried round the Cap to the large bay in the direction of Sangatte - potentially adding 2 or maybe 3 hours to our crossing before we would likely reach land. "Keep close to the boat, keep the lighthouse on your left". With hardly any pressure, I jumped in for the last time, swam as hard as I could whilst Pace Arrow picked up Gary, stowed the ladder and caught up. I could see the lighthouse slowly travelling from left to right as the current did its worst. I had been told to head for the rocks, and with the approval of the official Observer, touch the rocks, get two feet on, wave to signal landfall and push off to 'get the hell out of it'. He didn't want any accidents, limbs cut to pieces (which has happened), or feet stuck between rocks, etc!

Pace Arrow can go in to a depth of about 2 metres, and I realised with some alarm that, as the lighthouse was now on my right, he was turning her due south travelling almost parallel with the rocky shore, against the current, gradually inching nearer to land. With about 200m to go, they all shouted "Go!" and I broke away from the boat and headed for the biggest, flatest rock I could see. I touched at 7.45pm, turned, and with 2 feet on the barnacle covered rock, pushed up out of the water and off to swim back to the boat.

Once back on board, Paul opened up the other engine, and the full 500hp sped us back to Dover in just 90 minutes, later passing Viking Princess which had successfully landed soloist Dave Order shortly before us in 11 hours - the fastest solo crossing of 2010 thus far.

With such a feeling of euphoria, we stepped ashore in the fading light of The Marina, said our farewells and headed back to the cars, promising to meet up for a celebratory beer sometime soon. I felt fine, if a little tired, drove the now familiar journey home to Dorking and only when I stepped out of the car soon after 11.00pm, I realised I hadn't recovered my land legs fully, and was swaying around all over the place! The sensation stayed, though less so, intermittently for much of the next day - as the tiredness also became more apparent.

The screen grab of the plotted journey on the AIS shows a swim length of at least 26.5 miles, though there is a section where signals were absent and may not fully represent the curved route I could see on Pace Arrow's monitor. Crudely sharing the journey without any allowances for Gary's probable faster pace, it suggests I got away with something in the region of 7.8miles, whilst the others swam nearer 9.35 miles.

I look forward to an early reunion with Dave and Gary, and my sincere thanks to Freda Streeter, The General on Dover Harbour 'Swimmers Beach' for the guidance, ever watchful eye and accumulated years of Channel swimming knowledge, and to the Dover Beach Bums - Barrie, Irene, Louise, Michelle and Emma, who are there every weekend come rain or shine, handing out swimcaps, registering our entry and exit from the water, applying vaseline to those parts that rub sore, minding and retrieving our shoes, warming up those who may need it early on (it was just 9ºC when we started in May!), offering advice based on vast experience, selling SC&PF clothing, Maxim food compound and lightsticks, etc. And what a star was Paul Foreman our Pilot, thoroughly recommended if you're thinking of crossing - such a vital part of the team and, on this occasion, giving his boat and time free of charge to allow funds to be raised for this year's charity, The Air Ambulance Service.

A sincere thank you for all the good wishes of support and for the most generous sponsorship, so far raising personally in excess of £1,900 and at least £4,000 so far from The Flying Doctors and currently more than £25,000 from the three teams in this project.